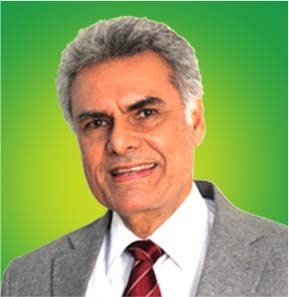 Hussain is the CEO of EcoPack Ltd and has over 40 years of business experience ... 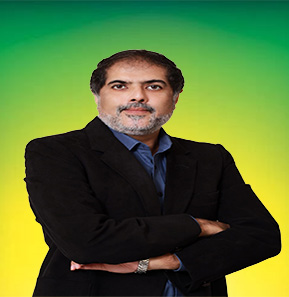 Raza joined EcoPack in 2006 as Director Marketing and became COO of the company in ...

Chairman of the Board

Hussain is the CEO of EcoPack Ltd., and has over 46 years of experience in trade and industry. This includes setting up and running a private limited company in Karachi manufacturing flexible plastic packaging. He is the founder Chairman and CEO of EcoPack and continues to strategically lead the company's growth in key areas such as corporate relationship management, financial arrangements & structuring, as well as developing new opportunities and partnerships for the company’s long term sustainable growth.

Prior to founding EcoPack, Hussain was a successful entrepreneur trading packaging materials such as cotton bags, paper sacks, polythene liners and jute bags. He has also had international exposure in trading commodities such as steel and wheat flour when he was stationed overseas. Subsequently, he set up EcoPack in 1992 and commenced a career in industrial production of Rigid plastic packaging mainly for the Beverage industry in Pakistan. Hussain is a honours graduate from the University of Karachi.

Ahsan Jamil is an entrepreneur with a strong social investing track record in both education and health. He is the President & CEO of the Pakistan Institute of Corporate Governance. He is a co-founder of Ubuntu Care, an Early Years Childcare & Development impact business. Prior to that he was the Country CEO (Pakistan) of a large multi-country Healthcare Fund for 2 years. He was a co-founder of The Aman Foundation and its CEO for 7 years. Here he helped set up Amantech, Teach for Pakistan and Aman Sports as a founding Chairman respectively and Injaaz Pakistan as a founding Director. Additionally, he set up Aman Health which included the award-winning Aman ambulance and Aman Telehealth services as well as some international mental health programs. Prior to that he was a founder Director of EcoPack Limited, where he worked for 17 years, the last 7 years as its CEO.

In his initial years he worked at Unilever Pakistan, Chase Manhattan Bank, Pakistan and E.F Hutton on Wall Street, USA. Ahsan has a Bachelors’ degree in Math-Economics from Reed College, USA. He has a post graduate diploma in Counseling and Addiction Alleviation. He also serves on the Board of the ICare Foundation and the Acumen Fund Advisory board.

Ali Jamil has been a finance and mortgage adviser in the United Kingdom with almost 48 years` experience in property and finance. He was a sponsor Director of EcoPack Limited since its inception in 1992 and has served on EcoPack`s board for several terms. He trained with the British Plastics institute and has a good understanding of the technological and marketing aspects of various plastic materials and manufacturing processes.

Ali has also worked in the family business of ‘blown film extrusion and flexographic printing’ for several years before he assisted in setting-up EcoPack Limited.

Asad is on the Board of EcoPack Limited as Non-Executive Director since the year 2007 and has been Independent Director since 2013. He did his B. Com, and LL.B. from The University of Sindh and did his MBA (Finance) from The Institute of Business Management, Karachi. He possesses 32 years’ vast experience with Non-Banking Financial Institutions in Pakistan which essentially included Leasing Companies and Modarabas with special focus on Leasing and Islamic Finance with functional involvement in the areas of Credit, Marketing, Operations and Risk. He served longest tenure with BRR Guardian Modaraba and its other group concerns for 18 years at various senior positions. For last six years he has been working with ORIX Leasing Pakistan Limited at various senior positions (including head of compliance and Islamic finance) and currently holds the designation of Senior Manager Special Asset Management. He is accredited mediator, certified from Pakistan Mediators’ Association. He played a significant role in establishing and ensuring best corporate practices and better automation systems for greater transparency and efficiency. He is the Chairman of the Audit Committee and contributes greatly towards ensuring good governance and compliance with company policies and regulatory frame-work.

Rehan Rafay Jamil is Ph.D Candidate & in Political Science at Brown university In the United States. His research & interest includes political economy of underdevelopment, and social policy in Pakistan. His dissertation examines the citizenship impact of Pakistan's largest cash transfer program: The Benazlr Income Support Programme: Rehan has over 6 years of experience In International development consulting at multilateral organlzations such as the World Bank, UNDP and USAID. He has a master degree in lnternational Affairs from Columbia University and a bachelor's degree with High Honours from Oberlin College.

Sonya Jamil is a certified psychotherapist and a member of the British Association for Counselling and Psychotherapy. Having completed her bachelors degree in Business Administration in 2003 from Dublin, Sonya pursued an Advanced Diploma in Psychotherapy from CPPD Pakistan, and was subsequently certified by the BACP, UK. She currently practices as a private counsellor and has been associated with, and worked in the mental health field for 5 years. Her business and mental health background brings valuable diversity to the board of EcoPack.